Under the faint luminescence of a crescent shaped moon that hung from a star-studded sky, we strolled the forests of Hollongpar on a cold December night. The silence around was deafening, except for the crumbling of withered leaves under our feet and the intermittent buzzing of crickets. While we hovered our torches along the length of the tall Hollong trees, our eyes prudently followed the narrow beams of light, searching for a rare and demure soul of the night. Not may know of Hollongpar –a sanctuary that lies approximately 160 kms to the east of the mighty Kaziranga. It is home to two endangered creatures of the animal kingdom, the Bengal Slow Loris and the Western Hoolock Gibbon- the only ape specie found in India. Slow Lorises are nocturnal and shy, making it extremely cumbersome to spot. Sanjib, our guide, had elevated our sprits stating that a Loris was sighted on a tree adjacent to the rest house just two days ago. So there was a high possibility that it hadn’t reached too far. We ventured into the forests in the dark of the night, scanning every single tree trunk on either sides of the trail. Almost an hour into the forest, there was no sign of the Loris. On a couple of instances, Sanjib took a deviation from the trail and disappeared into the bushes to try his luck, only to reappear with a dejected look on his face. As we inched further, the chances got bleaker. There was no way the Loris could have come this far with its snail-pace. My desperation even lead me into imagining a Loris hugging on to a Hollong tree, staring back at us with its nervous, yet watchful eyes gleaming like large fireflies. After about two hours of unsuccessful endeavours, we finally took a U-turn. Somewhere at the back of my mind, I knew that the probabilities of sighting such an evasive animal in a limited window of time were grim; almost null. However, the experience of exploring a pristine forest in the dark was so fulfilling that, not being able to see the Loris did not really matter any longer. Upon our return to the rest house, a huge Gecko peek-a-booed from behind a rusty cupboard. Dinner comprised of piping-hot Maggi cooked on wood-fire with onions and potatoes – undoubtedly the most perfect way to end a long day.

In the wee hours of dawn the next day,, we took the same trail, but this time our target was to track down a Hoolock Gibbon. Hollongpar had transformed from a mysterious piece of land under the moon the previous night to a celestial world that morning, illuminated by the golden rays of the sun piercing through the slightest opening in the canopy of a dense evergreen forest . The dry leaves were now wet with mist and dew drops dripped from the shrubs and trees. Butterflies and moths in vibrant colors and varied sizes fluttered everywhere. The quietude was blissful; almost meditative, only to be broken by sudden and loud echos of  ‘wooooo-eh-wooooo-eh-woooooh-eh’. The shrieks were long and continuous, more like sounds coming off a wind instrument. Yes! It was the song of the Gibbons! Sanjib spotted the first Gibbon within seconds of hearing the calls and pointed towards the rustling of leaves amidst a cluster of Hollong trees a few feet away. The first gibbon was out for some sun-basking! It was perched so high up, that our necks began to hurt as we tried to follow its movements! Soon, a second gibbon with a baby clung to its chest joined in. A little ahead, we heard more calls. This time, there was an entire clan, settled on lower branches than the earlier pair! The males were furry and black with long white eyebrows. The females were white with a lovely orange and golden tinge to their fur. Spreading their ultra-wide arms, the Hoolocks swayed between branches with superb precision. They seemed to be self-entertaining! As the sun went higher, the jungle reverberated with gibbon calls from all corners. The forest floor was scattered with thousands of half-eaten Hollong fruits thrown away by the playful apes. Hollongpar was abundant, not just with Hoolocks, but also with Pig-Tailed macaques, Stump-Tailed macaques and Capped Langurs, apart from countless butterflies and birds. A spectacular pair of Trogons hovered in the woods with their brilliant orange bellies looking like flames flying through the evergreen forests. After soaking in all that I could, I left Hollongpar with fond reminiscences of the gibbons; their ‘‘wooooo-eh-wooooo-eh-woooooh-eh’ echoing in my ears. 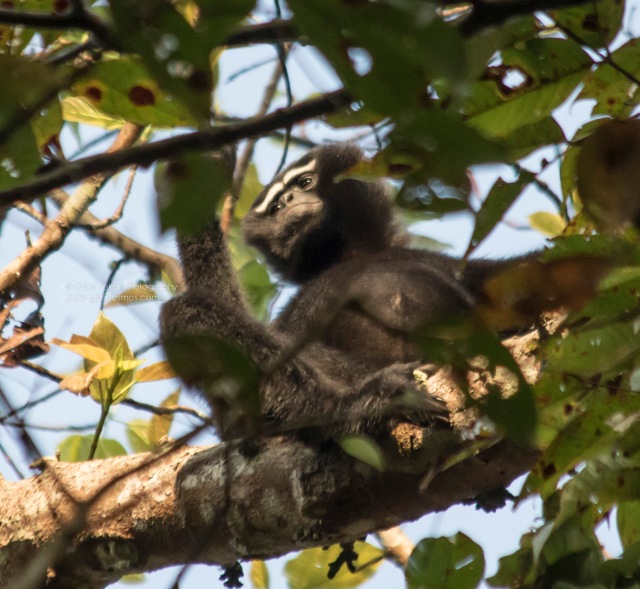 A female Hoolock gibbon swings on a Hollong Tree. Her fur has a orange-golden tinge.

A Pig-tailed Macaque with its young 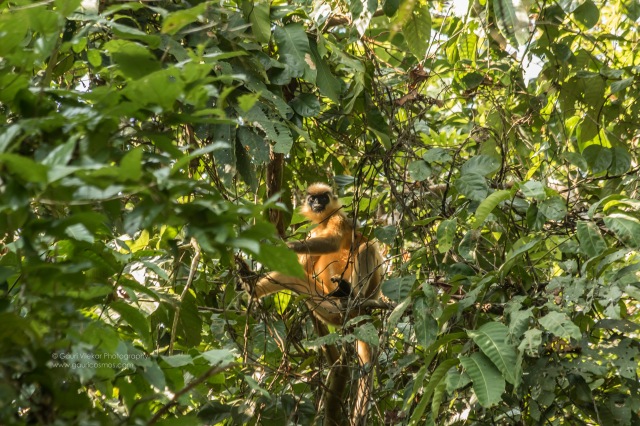 Rich biodiversity of the evergreen forests of Hollongpar 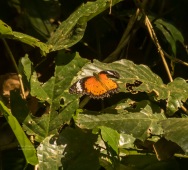 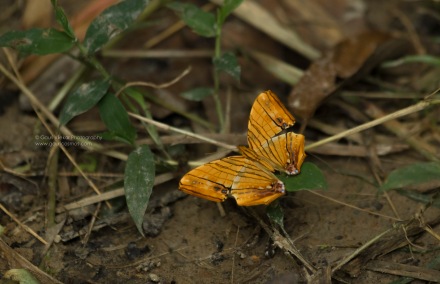 How to reach: Nearest city is Jorhat in Assam , which also has an airport. The sanctuary is apprx 20 kms away from Jorhat town and can be reached through a taxi.

What to do: Explore the evergreen forest, rich is biodiversity. The only species of ape, namely the Western Hoolock gibbon is found here. Apart from gibbons, the sanctuary also has multiple species of macaques, butterflies and ample birdlife. Leopard sightings are rare. Special permits need to be taken for a night trail to spot the Slow Loris. Permits may NOT be granted.

Avoid : Littering, playing loud music or creating ruckus. Do not feed the gibbons.

*We refers to myself and my spouse who is usually my partner in most of my travel feats.