The Falls of Hogenakkal

When your feet want to run away from the blazing summer sun; your eyes see a mirage in the middle of a road; your body yearns for a cold splash but you know that you have to wait for a few more months for the rains to quench your desire, what do you do? It’s time you head to Hogenakkal!

Hogenakkal, which simply means “Smoky Rock” in Kannada, is a place worth a quick visit over a weekend. Located on the river Kaveri in Dharmapuri district, it is around 180 kms from Bangalore. One side of Hogenakkal falls in Karnataka, the other, in Tamilnadu! The falls are often compared to the Niagara Falls; which, I honestly found to be a bit overrated but definitely not disappointing. It is said that the Karnataka side of the falls score more in terms of beauty than the Tamilnadu side during monsoons!

The drive from Bangalore to Hogenakkal is very plain and does not demand stopping for photography unless you really want to click some water birds lurking in a couple of ponds. All I stopped for was an unusual abandoned chariot with 2 bright yellow wheels and a few landscapes. 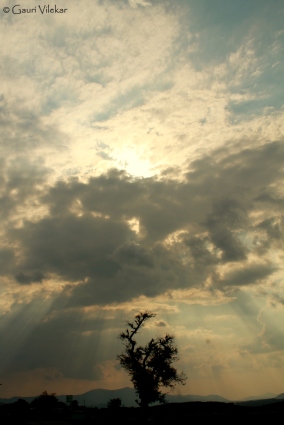 A peep from the clouds

Hogenakkal pops up as an unexpected retreat, since you will be greeted by total chaos while approaching it. You will find your feet making way through a crowded village with loads of people including the locals and the tourists. Do not get bogged down by the guilt of having chosen this place for a quite weekend!  Hogenakkal has a good amount of hotels to cater to the large chunks of visitors. The scale of business here can amuse you to an extent; I could confidently say that there are at least 500 food stalls. TTDC has a rest house here named “Hotel Tamilnadu”; the rates of which are reasonable and the place is pretty tidy. You have to walk barely 200 mtrs from the resort to reach the point from where your journey would begin.

one of the many food stalls at Hogenakkal

To explore Hogenakkal, you need to get into a coracle boat. A Coracle is a round boat made by cris-crossing bamboo hides, water proofed by bright blue or black colored plastic sheets and coal tar. Do not get deceived by the delicate look of the coracle as it is sturdy enough to easily accommodate up to 8 people at a time. Coracle rides are the major source of income for the villagers here apart from fishing and oil massage. The rates charged are negotiable to an extent of INR 100 only. I recommend that you take a coracle all to yourself, which will cost INR 900 over weekends and around 700-800 over weekdays. The fee is rather expensive, however, you are left with no other alternative.

The coracle. “Parisal” in Tamil

It was late noon when we reached Hogenakkal and since I wanted to witness it during sunset, we quickly got into a Coracle rowed by Gopal, whose face was wrinkled by his age and the hardships that life had put him through. Gopal opened up an unpleasant secret to us that the rowers get nothing out of the money that is charged for the rides! He was honest enough to request us to give him whatever we wished to, provided we felt the ride was worth it. Poor little soul!

The first glimpse of the Carbonite rocks at sunset

I breathed a sigh of relief after having surpassed the crowds to begin our journey to witness the striking landscape. The coracle took us to the first rocky patch and we had to cross over a series of steps to get to the other end where the actual ride began. As the coracle silently drifted into the waters, we felt an instant change in the atmosphere. The remote silence was only occasionally interrupted by another coracle passing by. Gopal first took us to the waterfall and placed the coracle right under it; kindling an instant cheer and making us giggle like a baby! We were able to get under the fall since we did our trip in April, however kindly note that if one plans to visit the falls in the monsoons, the coracle will not lead you to the falls for an up-close view, so plan accordingly.

After letting us enjoy the shower spray from the falls, Gopal displayed his skills by swirling the coracle confidently. After getting his share of compliment from us, he proudly rowed us further to witness the sight we had been waiting for! The water fell calm and so did the air, since we were now between cliffs on either side of us; the experience was instantly captivating!

The much awaited view

A little ahead, a coracle selling chips and other eatables passed by pleading us to buy stuff. A pair of egrets was flying around trying to find a meal; a couple of night herons and pond herons perched on the cliff busy pruning themselves; a few monkeys were trying to get lucky on a quick snack fed by the over enthusiastic tourists. The only sounds that encompassed us were the water splashing against the rows and gentle wind blowing past our ears! 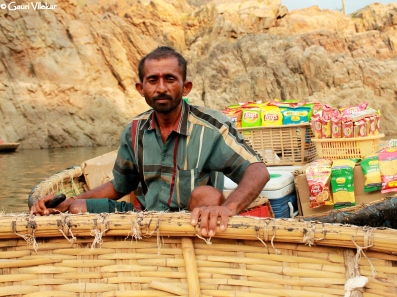 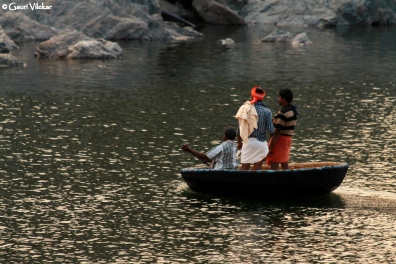 Shades of gold. Sunset at Hogenakkal

Gopal then lead the coracle to an itsy-bitsy beach which had only 2 things to offer- white sand and a shack selling fried fish. The sun was setting rapidly and we climbed over a rock patch which was around 30 feet high to get a 360 degree magical view of the entire terrain. The melting sun overcast its golden rays into the waters which glittered each time a coracle cut the waves. My eyes caught sight of a pathway on the opposite bank leading to a small temple. The overturned black coracles  looked like resting giant turtles on the riverbed. 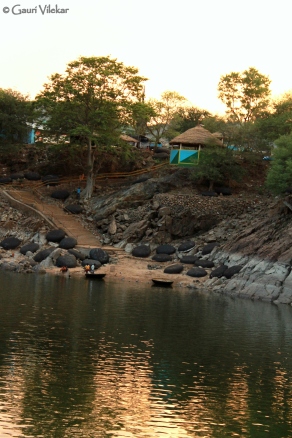 The overturned coracles on the river bed resembling Giant turtles

The entire cliff seemed as if God had taken his own sweet time to perfectly carve out the landscape, making Hogenakkal look like a perfect painting!  After basking in this timeless splendor for a while, we decided to head back to the rest house and Gopal returned happy after he got his 200 bucks from us!

The next day we headed to the watch tower to get a view of the falls from an elevation. You can get some good snaps of the falls and the Carbonite rocks with coracles going up and down the river from here. These rocks at Hogenakkal are believed to be one of the oldest in South Asia and the water is also said to have medicinal properties.

View from the watch tower

From the watch tower

Crisp morning over the rocks. View from the watchtower

We reached a gushing fall and what caught my eyes were a dozen of plastic bottles in unison, eager to make their way to the other end of the fall but were being vetoed by the force of the water, so they swirled over and over again at the same place. The act was interesting, though it instantly made me think of the disaster this place is heading to.

The swirling bottles and their story

A crisp morning on the oil clad rocks

We moved on,carefully stepping over the oil stained rocks to the other side to see the rope bridge. Suddenly we found ourselves trying to make our way between a hundred other feet! People getting drenched under smaller falls; merrily dancing to portray how lucky they were to find a corner to themselves; people eating “Upputu” (sweet roti with jaggery and dal filling) and savoring freshly caught fish fried to glory with lip smacking spics-the aroma instantly made my mouth water! And then there were tones of people gifting themselves an oil massage with the local oil; basking under the morning sun and then having a dip in the river. The atmosphere here could be compared to a local weekly market; hustling with crowd, chaos, noise and of course- loads of oil!

For a soul that I am, the instant feeling was to run away and get out. So I decided to head to a corner which was less maddening. I saw a fisherman perched on a high rock for a fresh morning catch. The net being thrown from a height was a pleasure in itself to watch and more pleasurable was to time the camera to get a perfect snap of the net merging itself into the water.

I would like to mention here that the entire place is seized by an alarming population of monkeys; aggressive and dramatic! After clicking a few frames, we decided to head back to the rest house and while doing so, we passed through the rope bridge and witnessed a comical scene. An overconfident monkey snatched the bag of one of the tourists who was all set to go for his oil massage and perched itself on the top corner of the rope-way. The wise mammal ensured that it took custody of the towel and returned the empty bag to him. The aggravated person climbed up the rope and slowly approached the monkey, pulling his towel back. While heading down, he slightly tapped the monkey’s paw as a punishment and to our astonishment, the monkey slapped him back! We burst out laughing appraising the unexpected move of the gutful creature! 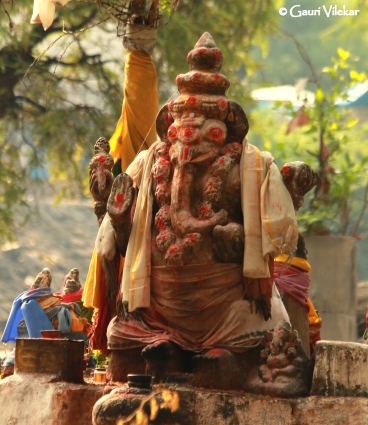 The creator witnessing the chaos..

It was early noon when we decided to head back to Bangalore with some fond memories and some not-so fond ones due to the very fact that Hogenakkal is losing its identity and charm to loads of trash, plastic, rags and oil and filth. Thanx to the careless and selfish tourists, this heavenly abode is already half way through destruction. Instead of augmenting its beauty, the locals are busy enriching themselves by collecting money from all possible sources- unauthorized parking, watchtower fee and overpriced coracle rides. I could stare endlessly at the picturesque terrain with the Goddess Kaveri obediently passing through the rocks and sustaining the coracles in her womb like a loving mother; providing the villagers a never ending source of livelihood. Hogenakkal is trying hard to secure and sustain its unrivaled beauty amidst a man made jungle.

With a disturbed mind, we started our drive back to Bangalore, but this time we chose the alternate route through the serene Melagiri forest instead. The range is said to have elephant corridors; though we weren’t lucky enough to spot any, the drive was definitely worth it!

Leaving you with a few more seized moments… 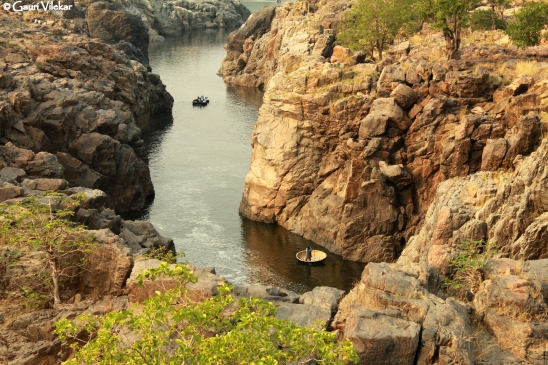 Crisp morning over the rocks. View from the watchtower 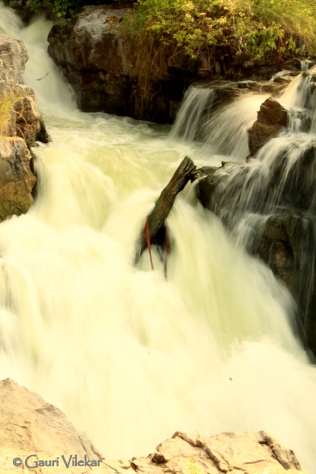 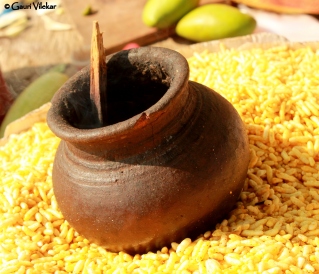 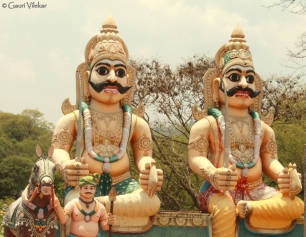 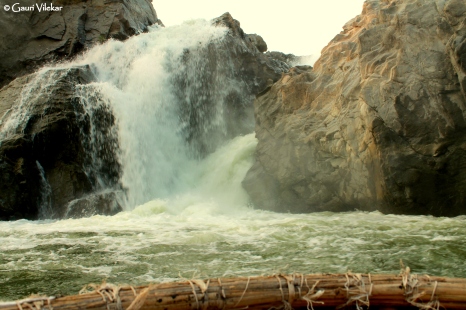 Up-close to one of the falls 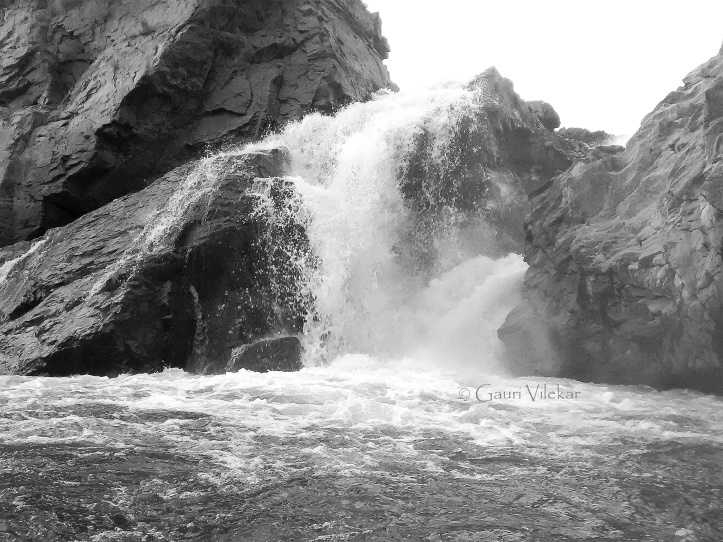 3 Comments on “The Falls of Hogenakkal”